Cham Fa set is normally used in Northern part of Thailand. It can represent Lanna culture and lifestyle. Lanna or Lanna kingdom located in the northern part of Thailand centered from the 13th to 18th centuries. When travelers come to northern part of Thailand, one of the greatest experience that they should never miss is eating with Khan Tok set.
In the past, people usually used Cham Fa in their significant ceremony such as wedding ceremony, religious ceremony or funeral. They normally used Cham Fa to serve food to monk or their guests. Currently, not only people in Northern part of Thailand but also people in other parts also use Cham Fa in their significant ceremony. Moreover, Cham Fa set can represent position of the owner because there are many styles of Cham Fa set. Each style has different price rate. The cheapest one might be the one that not have any tracery on the surface of ceramic.
There are eight pieces in Cham Fa set with four different sizes. The biggest size is suitable for rice or vegetable, and the smallest one is for sauce. Other sizes are suitable for viand. Northern usually uses Cham Fa to eat Northern Thai Green Chilli Dip (Nam Prik Nhum) with pork snack, vegetable and Thai sausage. People use Khan Tok to serve not only foods but also desserts. 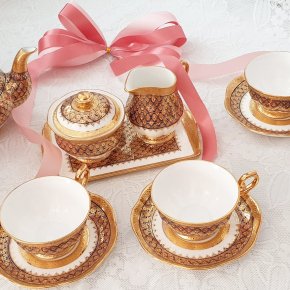